Single and on the market for a relationship?  Not just any type of relationship but the one that lasts forever?  The type that changes your life and makes you happier than anything in the world?  Yeah, so is every other single woman in New Jersey.  But that doesn’t mean it’s not totally awesome and worth pursuing.  If you’re searching for a boyfriend but whine about the type of men you’re meeting, then you might want to stop complaining and figure out what you’re doing wrong.

You basically have to take a look in the mirror and figure out what you’re doing wrong if you want your situation to change.  You have the power to change your ways and become a better dater.  Sure, you might still get played along the way—especially if you’re relying on dating apps or dating sites—but you have more control than you think.

Today, our New Jersey Singles matchmakers will show you five ways to spice up more than your coffee this fall.  It’s time to kick things up a notch and spice up your dating life. 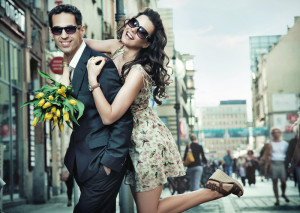 Think it’s easier said than done?  Well, we’re going to have to break it to you: it shouldn’t be hard to stop dating guys who aren’t right for you.  You already know what a loser looks like, because every woman has dated a loser in the past.  If you want to find you’re happily ever after, be careful about who you give your time to, and don’t ever put up with a loser.

It’s a good idea to figure out what’s really important to you.  Do you want a guy who is into his job as much as you are?  Do you want someone who lives on their own, pays their own bills, cleans their own apartment, and stocks their fridge?  You know, the grown up type of guy?  If you want to find love, you’re going to have to start making smart decisions about who you give your time to.

3. Do a Little More Listening

When a guy does things that tell you he doesn’t want to be with you for real, believe it.  Don’t think you can change him because you never will.  Men who are afraid of commitment will never change, and it’s not your job to try to change them.  When you meet a guy who wants something real, believe him.

It’s never a good idea to waste your time with men who are toxic for you.  But it’s also never a good idea to dump someone because they don’t live up to your high expectations either.  Basically, you have to find middle ground and be realistic about the man you’re searching for and have a little wiggle room.  It’s one thing to want someone who is a hard worker, but don’t discount someone because they don’t have a top position in their company.

We don’t think of women as game players like men, but there are many out there who do play games.  Don’t wait to text a guy if you really like him.  If you like him and feel a connection, what are you waiting for?  Why wait?  He’s not going to think you’re clingy because you answered him.  On the contrary, he’s going to be very excited to hear from you.

Follow these five tips from our New Jersey matchmakers and spice up your dating life this fall.