We’re pretty sure you remember your mother saying “They’re just jealous of you” when you would go home from school and tell her someone made fun of you, right?  Well, sometimes when someone says “She’s playing hard to get,” they’re just saying it to be nice and to avoid hurting your feelings.  So you scratch your chin and quietly wonder if she’s really playing hard to get or if she’s just not feeling you.

The good news for you is that we’re going to tell it like it is.  It’s our job to tell you the truth.  If she’s not into you, that’s fine.  You can move on and find someone else who truly wants to be with you.

Are you confused by a woman’s behavior towards you?  Is she playing hard to get or is she taking her time getting to know you a little better?  Fret not, our New Jersey Singles matchmakers are about to show you five signs she’s not into you.  As hurtful as it may be, it’s better to find out now so you’re not wasting your time and efforts (and missing out on your Mrs. Right). 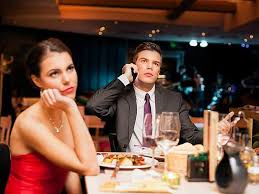 1. She doesn’t answer your texts.

Believe it or not, there are dating rules regarding text messages.  Someone who texts a lot will come off as clingy and even desperate (so we hope you’re not overdoing it with the texts).  But if you only text her a few times and she never responds to you, she’s not playing hard to get.  Unfortunately, she’s not into you.  If you send her long text messages and she only gives you one-word answers, then she’s definitely letting you know she’s not feeling you.

2. She tells you she’s not ready for a relationship.

Often times when we like someone we believe their words are their true intentions.  If she tells you that she’s not ready for a relationship and goes out on dates with other guys every weekend, she’s not playing hard to get.  She’s just not into you.  If you think one day she’ll be yours, you’re living in a fantasy world.  She’s already made up her mind that you’re not her type, so you need to take the hint and let her go.

3. She tells you she likes you as a friend.

Yep, you’ve officially been put in the friend zone.  Ugh.  Do you know how many people really ever make it out of there?  Not many.  The reason she’s telling you that you’re her friend is so that you don’t make any advances on her.  Don’t mistake her kindness and generosity for interest in you.  She’s just trying to let you down gently without hurting your feelings.

4. She blows you off all the time.

Sure, there are times when a woman is busy and has to cancel plans here and there.  But if this is something she’s doing on a regular basis and is turning you down every time you suggest something, then she’s not playing hard to get.  She’s really not interested in you.  If she gives you the brush off and blows you off all the time, then she definitely doesn’t see you as a potential partner.  Better you find out now so you don’t keep chasing her and wasting your time on something that will never be.

5. She flirts with other men.

There are times when a woman flirts with other men to make someone jealous.  But if she is doing it blatantly, or with one of your friends, then she’s not playing hard to get.  She’s trying her hardest to tell you she’s not into you.  Don’t be a fool and think she’s playing hard to get.  She’s trying to show you through actions so she doesn’t have to come out and say it to you.  No woman wants to crush a man’s heart.

Stop trying to convince yourself that she’s just playing hard to get.  If you notice any of these five signs, then she’s really not into you.  Save your time and energy for a woman who feels the same way for you.  Believe us, she’s out there.

If you’re single and want to meet relationship-minded single women in New Jersey, contact our expert matchmakers here at New Jersey Singles Dating Service and let us make the introductions for you.  We’ll get to know you and everything you’re looking for in a partner and only introduce you to quality women who fit your dating expectations.  Call 1 (888) 417-0020 to book your FREE matchmaking consultation today!